Tyra Banks Cancelled For Bullying Past During ANTM

Tyra Banks has been a household name since she first graced the runway. But as well a being a successful model she also had a successful t.v show Americas next top model (ANTM). The show was best known for the controversial makeover episodes. Over the years many have expressed concerns of how problematic comments on the show were. In one episode a young woman was mocked for having a gap in her teeth and told ‘cover girl don’t want a gap in their campaign’ similarly in later series of the show tyra asked a young model to widen her gap. A twitter user went as far as describing Tyra Banks antics as diabolical. 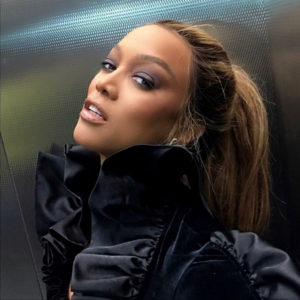 “I mean we always knew Tyra Banks was a little ditzy. I had no idea she was telling black girls they’d never make it with gapped teeth but then having a dentist file down a white girl’s teeth to make her gap more prominent bc it was the “look”. This muthafucka was diabolical 😭 “.

Another controversial scene  was when a model with a bee allergy was forced to pose with bees! One person tweeted: I’ve never realized how wrong Tyra Banks was back then like I do now. Sis really made a girl that was allergic to bees, pose with live fucking bees 💀”.

Many people have taken to twitter to express their disbelief that soo many outrageous scenarios took place on ANTM.

Another twitter user declared Tyra as “anti black”. Referring to the episode where contestant Yaya was accused of pushing her African look in peoples faces.

“This was straight up anti-black lol also Yaya was ahead of the curve RE: the yeehaw agenda and if Tyra had an iota of taste or style she would see that the mixture of afrocentricity and cowboy aesthetics was subversive but noo. Tyra has never been high fashion! & that’s on Naomi!”

Although many can’t deny it’s flaws Americas Next top model was a hit show for many years. Society just weren’t as ‘woke’ as it is now.