Teresa Giudice has supported her boyfriend after a ‘weird’ video of her boyfriend Luis Ruelas resurfaced on Tuesday’s season 12 premiere of The Real Housewives Of New Jersey.

The video sees Luis huddled on the sand with a group of men, Ruelas, 46, speaks into the camera and tells his girlfriend, “I’m coming home to see you to get engaged and bring our family together and finally get married and have a life together.”

The men encouraged him to speak from the heart because she “doesn’t want to f–cking hear your brain.”

“I love you. I’m sorry I made mistakes and held myself back and held my truth inside and worried about other people around me,” Ruelas continued. “I feel your pain, I’m sorry I put you through pain.”

The 49-year-old reality star was hosting a summer garden party when confronted by Margaret Josephs, 54. Margaret insisted that Luis, 46, needed to address the video.

However the Bravo show did not show the video but included images of topless men at a beach as Margaret described it in a confessional. 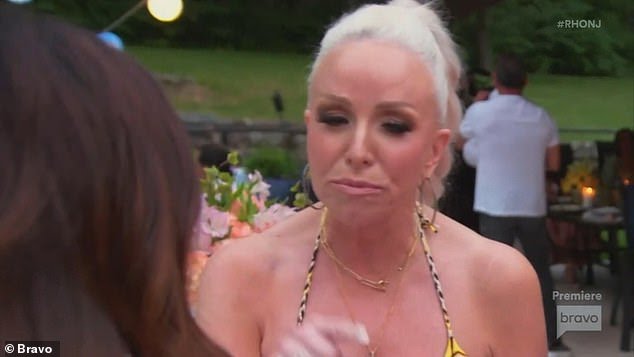 ‘This video — I don’t know what was going on. But Luis is on the beach in the middle of this pack of men. And they’re all, you know, naked. The poor guy looks like he’s been dragged through the river, and he’s begging for forgiveness with the men behind him,’ Margaret said.

‘And they’re all like cheering him on, [saying], ‘You can do it!’ And they’re men who would scare the hell out of me if I saw them in an alleyway, by the way,’ she added.

‘Listen, that’s part of his past, so he doesn’t owe anybody an explanation about anything,’ Teresa told Margaret.

‘I go by how me and Luis are present and future. I have a past. He has a past,’ Teresa continued.

‘I don’t care, and I want everybody to do the right thing because this is my home. Give me the respect, give him the respect. If not, it’s not gonna be good,’ she sternly told Margaret.

‘Listen, you understand everybody just loves you and is concerned,’ Margaret said as she immediately started backpedaling.

Theresa concluded the summer party by announcing her plans to purchase a home with Louis.