The Instagram model started laughing at the resemblance question and responded: “I don’t want to speak on that.”

She then stated: “Not really,” when asked if she saw any similarity between them.

When asked if she and Kanye talk about “Kim stuff,” Chaney replied: “No, we don’t think about her.”

She attempted to avoid answering if she had thoughts on the rapper’s social media tirade on the Keeping Up With The Kardashians star.

Chaney said: “I think you should talk to him about it. I don’t want to speak on that.” 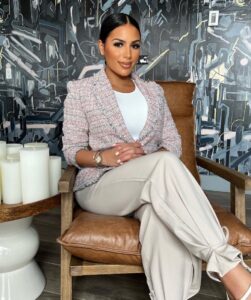 When pressured to answer if she was worried about Kanye’s mental health, Chaney headed straight towards the back of the van. This comes after the rappers continual online harassment of Kim Kardashian’s new boyfriend Pete Davidson. Since the duo started dating, the rapper has done everything – from calling the standup comic a “d**khead,” to threatening to “beat his a**,” to even accusing him of attempting to “destroy” his family. His behaviour resulted in Kanye being banned from Instagram for at least 24 hours.

The rapper also claimed he had “ran Skete off the gram” when the comedian deleted his account after posting and deleting his first post.

“Tell your mother I changed your name for life,” Kanye bragged in a caption of a post afterward.

A spokesperson for Meta told TMZ that Kanye’s recent posts “violated Instagram’s policies on hate speech, harassment and bullying”. The outlet was told his account has been suspended for 24 hours. Kanye won’t be able to post, comment, or send direct messages.

Chaney was recently thrust into the spotlight after being spotted with rapper Kanye West. After the pair were spotted She later took to her Instagram page to tease that she was ‘his muse,’. However she did not clarify who ‘he’ was at the time. However since Kanye ending his brief romance with Julia Fox, Kanye appeared in a selfie on Chaney’s Instagram account.